It had been months since I had played Horizon Zero Dawn. Last I had played the game was back in May of this year, when I suddenly got obsessed with getting the platinum trophy for the game. I had not made use of the photo mode much then. I started the Frozen Wilds DLC story but never got fully into the game.

When we started planning for the Gametographer's Extra Life stream, I decided that I would play some Frozen Wilds and continue the story. Little did I know of how the game would pull me in. When I booted up the game for testing, I was pulled into the details of the world. Recent challenges on twitter and the knowledge and inspiration accumulated since I last played the game kicked in and I just wanted to try out some of it for myself.

I was drawn into the game. I remembered how much I loved taking shots in this game.

This was THE game that convinced me to get the PS4. This was THE game that got me into Virtual Photography. Back in 2017, my friend got his PS4 and along with the console, he got this game. I had seen trailers of the game form the last E3, but when I actually saw the game in person, I fell in love with it. It was so damn beautiful. Of course, at the time, the photo mode was all new to me and if I remember right, I just wanted to take a few shots to set as a wallpaper.

I was surely able to get myself a PS4 a month later and the first game I got with it was Horizon Zero Dawn. At home turf, it was a different dynamic. I started taking shots of everything, the trees, the sun, Aloy, landscapes, structures, creatures. I just went snapping away.

I hadn't had much experience then and wasn't much into portrait photography. I made a lot of rookie mistakes, but over the years I learnt a lot with the game. This was specially true for the #Gametography30 a couple of years ago when I had to take shots adhering to a certain theme. I was playing the game at the time and found it's photo mode so very helpful in the process.

You know that moment when are going through your older shots and wish that you had take the shot at a better position. I had a lot of such moment when looking through my Horizon shots. Some of the ones above also give me that feeling.

Back to the Present

It was the day of ExtraLife and my stream was setup with the Frozen Wilds. From the get-go, I was enjoying myself. It was awesome to jump back into this game and try out the new stuff I had learnt especially from the Virtual Virtual Photographers' Conference (VVPC) that had happened a few hours earlier. This was the game that would help me practice what I had learnt.

Aloy was the perfect subject.

I had suddenly grown obsessed with passageways. There was so much life in the desolation.

I went on snapping away and ended up with more than 100 shots from the 4-hour stream. Having company during the stream in chat helped a lot through the process esp. chatting with @tidymice.

Overall, it was one of the best streams I have had and I was really happy with all the shots that came out of it. I am really excited for Horizon:Forbidden West and hope to get a chance to play it on the PS5 (even though it will be available for the PS4). 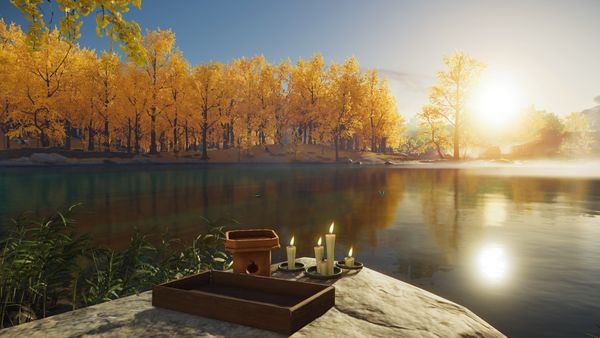 Exploring the power of three lines